Atlanta – “We Run This Vol. 13” is a brand new entry in the exciting series. It’s a collaboration between the DJ “Mr. E” and the independent record label “Hustle Gang Music”, their sixth joint effort so far. Previous “We Run This” mixtapes have proven popular throughout Europe, Japan, Australia, the U.S., and many more places across the globe.

Grand Hustle Records, also known as Hustle Gang Music, is an Atlanta, Georgia-based record label, founded in 2003, by American hip hop recording artist T.I. and his business partner Jason Geter. Up until December 2012, the label was distributed by Atlantic Records. It currently operates as an independent record label. The label is home to artists such as B.o.B, Young Dro, Trae tha Truth and Travis Scott, among others. Source: Wikipedia.

For his part, Mr. E is a well-respected DJ and the entrepreneur behind the We Run This Mixtape series. While the german DJ normally resides in Nuremberg, Germany, he has established on his “We Run This” compilation series, some of the best and most notable artists to emerge over the past 2 decades like: T.I. Jadakiss, B.o.B, Talib Kweli, Mobb Deep, 8Ball & MJG or Ace Hood.

“We Run This Vol. 13” will let you experience the magic of Hustle Gang’s artists and Mr. E’s gifts. You’ll marvel at the energetic, imaginative freestyles and blends, and you’ll realize that every transition has been crafted with care and love. Get your copie on iTunes now!

Nothing but net – Travis Scott

Drop that bitch off – Young Dro

So many Tears – Trae The Truth

Nothing but net – Travis Scott

All about the Money – Trae the Truth

Put it on her – Yung Booke

Down to Babies – Young Dro

Grand Hustle Newcomer “Spodee” with his new single & video “Away”

featuring King of the South: T.I. and Houstons own: Trae The Truth

Listen / Download “Away” by Spodee, T.I. & Trae the Truth on Zippy:

Watch the video of “Away” here:

Spodee, T.I. & Trae on the official Grand Hustle compilation: “We Run This Vol. 10″: 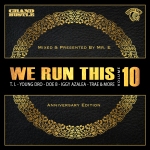 T.I.s Hustle Gang is on the run, another new Single & Video called “Here I Go”

Spodee get together with Mystikal, Young Dro, Shad da God as well as T.I.

Watch the video of “Here I Go” here:

The new Grand Hustle Mixtape “We Run This Vol. 10″ with our in house DJ Mr. E is set to drop later this month!

Mr. Es “We Run This” series stands for mixtapes that has been mixed together clever and on a high level. Tracks, exlusives, shoutouts and freestyles switching with several added skits, scratches and blendings, which gives you a unique listening experience. A must have for every Hip Hop fan who love southern rap & quality lyrics! Get your “We Run This Vol. 9” copie on Spotify or Amazon today!

We Run This Vol. 9 Tracklist:

Rich Kidz featured on We Run This Vol. 8!

Get the official Mixtape now on iTunes: 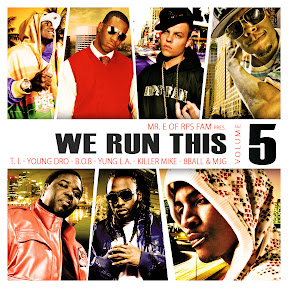 Leading Hip-Hop label “Grand Hustle” and German DJ/Producer Mr.E from RPS Fam represent, the new Mixtape “We Run This Vol 3”; a total of 26 hit bangers including new, exclusive and unreleased songs by some of the top Hip-Hop legends in the game: T.I., 8Ball and MJG, Killer Mike, as well as newcomers Yung L.A., Mac Boney, State House, Young Dro and, Baby Boy from the “Grand Hustle” label.  This are the Artist forming the Grand Hustle Posse, and each track has its unique full of variety sound.  Therefor, “We Run This Vol 3” stands for one thing: an increasing diversity in the label – spreading sound.  Stylistic variations, and beautifully decorated blends, scratches, hosted by the one and only Mr.E aka the German Luger makes this Mixtape a must have item!