Our Classic, and the first We Run This Mixtape from 2008 is now available as Free Download!

November 2008, New Yorks legendary D-Block is back with a new compilation CD mixed by the DJ / Producer Mr. E of RPS Fam and presented by germanys Hip Hop Magazine “Backspin“.

The CD named “Mr. E & Backspin pres.: D-Block” is packed with over 26 of the newest Sounds, Jadakiss, Styles P, Sheek Louch & co has to offer!

“Mr. E & Backspin pres.: D-Block” delivers you with mixes of new and exclusive Eastcoast tracks like “Cocain Music“, “Yonkers Anthem“, “Its like that“, and Dirty South bangers like “We comin” and the “A millie” Freestyle. The CD also contains featured tracks by MOP, Jay-Z, DMX , Snoop Dogg, Lee Carr and NeYo.

Mr. E of Tha RPS Fam (who already released CD´s with well known Artists like Unk, Dipset, etc.) stands for CDs that has been mixed together clever and on a high level. Tracks, Exlusives, Shoutouts and Freestyles switching with several added Blends, which gives even well known Classics a whole new sound.

One year has passed since DJ Mr. E  aka „The German Luger“ of RPS Fam dropped the anniversary edition of his „We Run This“ series. After 11 editions, Mr. E’s „We Run This“ series has been a huge success and featured some of the biggest artists in HipHop such as T.I., Mobb Deep, The L.O.X., Talib Kweli, B.O.B., Ace Hood, Iggy Azalea and many more.

Now he’s back to give you another installment, the anticipated „We Run This Vol. 11“. This time he teamed up with Hip-Hop producer G.U.N. Productions from Germany, who‘s been making a lot of noise in the New York music scene. After grinding in NYC and studio sessions with legends like Raekwon the Chef, he been getting consistent radio play on stations like Hot 97 and Power 105.1 over the last couple of years. His music was also featured on MTV and the 2013 NFL Honors.

„We Run This Vol. 11“ provides you with ill rhymes and original East Coast production to take you on a ride through the 5 boroughs. The new mixtape compilation, which is hosted by Hip-Hop legend DJ Kay Slay and entirely produced by G.U.N. Productions, features an All-Star line-up of East Coast MCs such as Jadakiss, Styles P, Raekwon, Joell Ortiz, Papoose, Vado, Fred The Godson, Sheek Louch and many more to give you vicious bars over banging beats! The project contains 27 records, including unreleased material as well as 3 exclusive Instrumentals by G.U.N. Productions for all the up- and coming MCs out there.

Mr. E keeps it live on the ones and twos as usual, transitioning the songs through cuts, scratches, drops and skits in theme with the music, which makes this project a great body of work that gives you a unique listening experience.

It’s available on iTunes, Amazon and Spotify. Get your copy now!

All tracks produced by G.U.N. Productions

Samir Hussain aka G.U.N. Productions made it to Mr. E, to work with him on

Styles P, the Bronx MC, songwriter, CEO and most recently author, is dropping his heavily anticipated Master of Ceremonies,  album on eOne Music on October 4th.

The lead single “Harsh” that features Rick Ross and Busta Rhymes and is currently featured on several urban radio stations across the country.

“Master of Ceremonies is a body of work that follows the finest lyrically tuned MCs. Point blank, period. It was made with respect of the craft,” Styles explained in a statement. 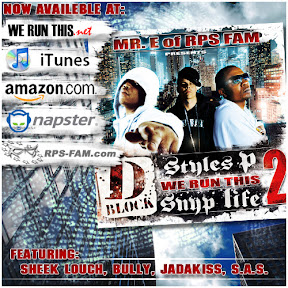 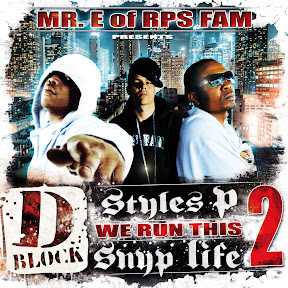 From the official mixtape: We Run This, with D-Block: Jadakiss, Styles P, Sheek Louch

from the Mixtape: Diplomatic Affairs with S.A.S. Dipset Eurogang (2006)

RPS Fam get it started – Mash Up Blend by Mr. E – with DMX, Raptile, Illgrill

from the Mixtape: Europes most wanted DJs – Global Threat – hosted by A-Mafia (Dipset) (2007)

Sheek Louch – Where is D-Block at

Styles P – Where The Angels sleep 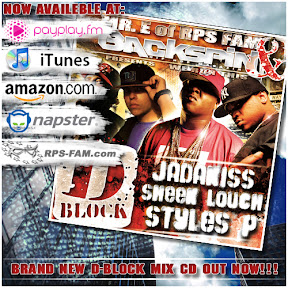